Get the chance to visit one of the most popular destinations in Greece outside or inside the city walls and spend your day by visiting the historical monuments and admiring the beauties of each place. All these in just one day!

The On-Line payment process for the ECMP 2016 is fully encrypted, in order to protect credit card transactions.

BY E-MAIL OR FAX

Please download the relevant Form HERE and return the form filled in to the Professional Congress Organizer by fax +30 210 7711289, or e-mail ecmp2016@prctravel.gr

Deadline for tours reservation is May 30th, 2016

You may select from among the following tours and excursions.

From the Acropolis to Omonia Square, with the half-day sightseeing and Acropolis museum tour you'll see all the famous sites of ancient and modern Athens on this comprehensive morning tour. Offering a perfect overview of the modern city, this guided half-day tour, the only one which includes headphone system will help you get your bearings if this is your first visit to Athens.

The Athens half-day tour, depart for a photo stop at Panathinaiko Stadium where the first Olympic Games took place in 1896. It is the only stadium built out of white marble. Proceed, passing by Zappeion and Temple of Olympian Zeus. You will then pass the Athens Trilogy which includes the University of Athens, the Academy of Athens, and the National Library. Continue passing by National Garden, Hadrian’s Arc, St. Paul’s Church, Parliament, Tomb of the Unknown soldier, Schliemann’s House (Numismatic Museum), Catholic Cathedral, Old Parliament, Constitution Square ,Russian Orthodox Church, and finally ACROPOLIS (visit Propylae, Temple of Athena Nike, Parthenon, Erechtheion with its Porch of Maidens).

Continue the expert guided Athens sightseeing and museum tour with a pleasant short walk passing by Herodion and Dionysos Theater, in order to visit the ACROPOLIS museum. Avoid and skip the lines of the new museum. Main attractions such as votives, artifacts of everyday life, statues from archaic period, Caryatids, and of course the Parthenon hall with the metopes, the pediments and the frieze will impress you.

A half day afternoon trip from Athens full of images. Begin your Sounio tour with a wonderful drive along the scenic coastal road which affords a splendid view of the Saronic Gulf, passing through some of Athens most beautiful suburbs (Glyfada,Vouliagmeni, Varkiza). As you approach Cape Sounion, it rises like a sheer cliff out of the sea. At Cape Sounio where you will visit the 5th century B.C. Temple of Poseidon with one of the most breathtaking panoramic views in the world (on a clear day you can see at least seven islands).The precipice is a sheer 197 foot drop to the sea.

Land masses to the west stand out in sharp profile: the island of Aegina backed by the mountains of the Peloponnese. The beauty of the surviving Doric columns has inspired many poets, including Lord Byron who carved his name on one of the columns. 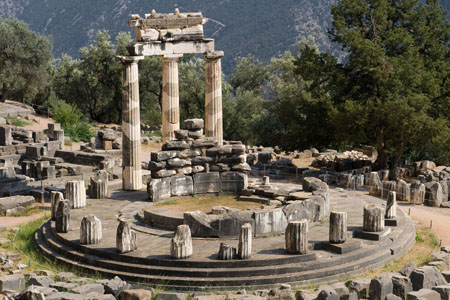 Depart from Athens to Delphi to explore one of the most famous archaeological sites of Greece. Along the way, you will see the plain of Beotia, an agricultural center and you will also pass by the city of Theva, the birthplace of King Oedipus.

You will continue your Delphi day tour towards Mt. Parnassos, making a short rest stop outside the town of Levadia. You will drive then to DELPHI, known in ancient times as the navel of the world. Pass by Castalia Spring, visit at the archaeological site and view the monument of the Argive Kings, the treasury of the Athenians, the Athenian Stoa, the Polygonal Wall, the monument of Platea and the Temple of Apollo famous for its oracle and Delphi museum, with its spectacular exhibits include the frieze of the Treasury of the Sifnians, the Naxian Sphinx, the Statue of Antinoos the metopes of the Athenian treasury, the famous bronze Charioteer, originally created to commemorate a victory during the 476 B.C. Pythian Games, and many other artifacts. After lunch return to Athens via the picturesque mountain village of Arachova, built on the south slopes of Parnassus, well known for its attractive hand-woven carpets, rugs and quilts, as well as for its wine and cheese (short stop). 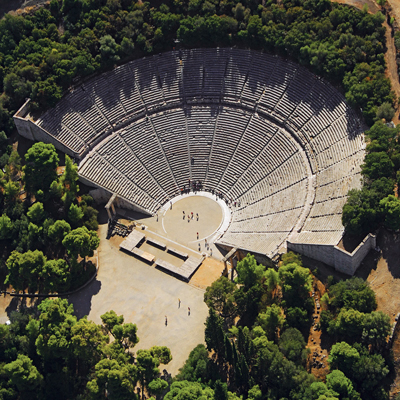 Explore with this guided one full day trip from Athens to Argolis the remains of the ancient city of Mycenae a major center of Greek civilization from 1600BC to 1100BC and a world heritage monument.

Depart from Athens for one day tour via the coastal National highway for the Corinth canal (short stop). After the Corinth Canal, you enter the region of Argolis, land of Homer’s Golden Mycenae, a UNESCO World Heritage site. Dating back to the second century B.C., Mycenae was one of the major centers of Greek civilization and a military stronghold which dominated much of southern Greece. Visit the archaeological site, home to the kingdom of mythical Agamemnon. You will see the Cyclopean Walls, the Lion’s Gate, the Royal Tombs, including Agamemnon Clytemnestra's, and the Treasury of Atreus, a magnificent 14th-century B.C. structure. Time will then be taken for a traditional Greek optional lunch at a nearby restaurant. Before lunch an optional stop in a pottery factory. After lunch through ARGOS proceed to Nauplia the first capital of modern Greece with its Venetian fortress of PALAMIDI and the fortified islet of BOURTZI (short stop).

Continue on to Epidaurus and visit the ancient theatre. The UNESCO’S world heritage listed monument is reputed to be the birthplace of Apollo's son Asklepios, the healer and was the most celebrated healing center of the classical world. Epidaurus is probably most famous for its theatre, one of the best preserved classical Greek buildings and still used today due to its amazing acoustics. The Argolis (Mycenae - Epidaurus) day tour returns to Athens in the late afternoon. 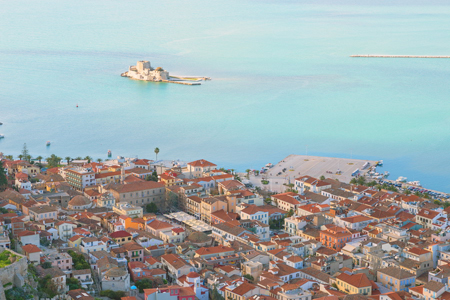 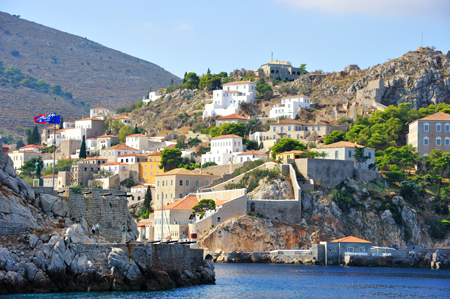 Take a day cruise from Athens to the fabulous Greek islands of Hydra, Poros and Aegina for a relaxing day on the sea. With all your transport, transfers and buffet lunch organized, you can sit back and enjoy your leisurely day cruise with free time on each island to explore. After transferring from Athens to Piraeus by motor coach, you'll set sail for the island of Poros, where you'll have free time for strolling and shopping.

Next, it's on to the island of Hydra. You will have about 1 hour and 45 minutes at leisure to enjoy the unique charms of Hydra Island, whose amphitheater shape once served as a safe shelter for Saronic Pirates. From the decks, you will be able to admire the very special architecture and dramatic landscapes of this island, whose old traditional stone houses and mansions silently stand witness to a long and turbulent history.

Upon arrival in Egina (Aegina) you can either join an excursion to the Temple of Aphaia (cost not included) or take a walk around the main town. Aegina is one of the Saronic islands of Greece in the Saronic Gulf. The lovely island is only 31 miles (50 kilometers) from Athens, and is a popular getaway for Athenians during the summer months.

After sailing back to Piraeus port you'll be transferred to Athens. 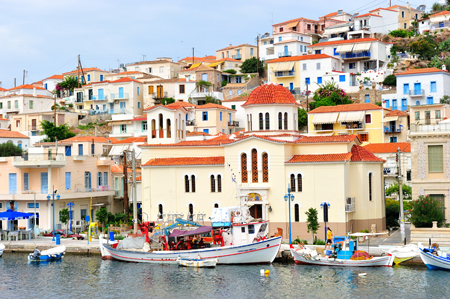 © 2015 EFOMP. All Rights Reserved | Developed by VOTeam | Design by W3layouts